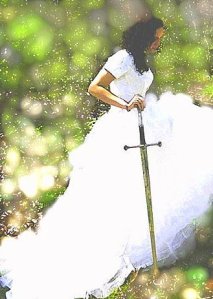 The Warrior Bride comes from a place of government, authority, rule and reign. In this she partners with Christ, being made ‘perfect’ through Him to reign as part of the monarchy. Through the redemption of her Husband, she was crowned Queen and became Royalty. 1 Peter 2:9 “But you are a chosen people, a royal priesthood, a holy nation, a people belonging to God, that you may declare the praises of him who called you out of darkness into his wonderful light.”

From the position of His throne He declared “I give authority to trample serpents and scorpions and over all the power of the enemy” Luke 10:19. “And these signs shall follow them that believe; In my name shall they cast out devils; they shall speak with new tongues; They shall take up serpents; and if they drink any deadly thing, it shall not hurt them; they shall lay hands on the sick, and they shall recover” Mark 16:17-18.

Patricia recounts the experience of being bitten by a venomous snake, a water moccasin in  the Summer 1988. Within 15 minutes she suffered from high fever, chills and neurological disturbances. By the time she got home she was too sick to be aware of her physical condition and did not seek medical attention but went to bed. She was deathly ill for three days but on the fourth day was fully recovered.

Paul gives an even more striking example in Acts 28:3-5 “And when Paul had gathered a bundle of sticks, and laid them on the fire, there came a viper out of the heat, and fastened on his hand. 4 And when the barbarians saw the venomous beast hang on his hand, they said among themselves, No doubt this man is a murderer, whom, though he hath escaped the sea, yet vengeance suffereth not to live. 5And he shook off the beast into the fire, and felt no harm.”

1 Peter 5:8-12 “8 Be sober, be vigilant; because your adversary the devil, as a roaring lion, walketh about, seeking whom he may devour: 9 Whom resist stedfast in the faith, knowing that the same afflictions are accomplished in your brethren that are in the world.10 But the God of all grace, who hath called us unto his eternal glory by Christ Jesus, after that ye have suffered a while, make you perfect, stablish, strengthen, settle you.11 To him be glory and dominion for ever and ever. Amen”